Mr. Braatz, born in Berlin in 1954, was trained as a full size boat builder and first employed at a boat yard in Berlin, building rowing boats for races. He produces exquisite ships-in-bottles as a hobby, introduced to this craft by model builder Hans Nensa. In Mr. Braatz’ more than 16 years of model building he has produced, among others, a Yankee Whaling Bark of 1850 in a 5-liter bottle, complete with forestays and ratlines, tryworks, windlass and other deck fittings, a figurehead and a carvel whaleboat. His work is in the permanent collection of the Museum fur Verker und Technik in Berlin. Mr. Braatz is a member of both the Ships-in-Bottles Associations of America and of Europe, as well as the Nautical Research Guild. He has won a silver medal for his Nordic Sloop, Circa 1896, and a gold medal for his Whaling Bark, Circa 1850 at the 1994 Friendship Modeling Competition in Hamburg, as well as numerous other prizes including six gold medals, awarded in Germany. He took part in the German Championship in ship modeling and the World Championship, in Poland, in 1998, where he won another three gold medals. His model of Hannah won him the title, “German Master 1998.” 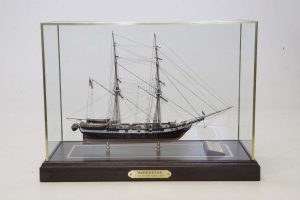 By: Bernd Braatz: This model depicts one of the original Revenue Cutters commissioned for the U.S. Navy in Baltimore, circa 1837. She was first built... 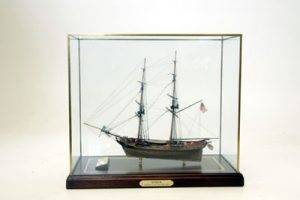 By: Bernd Braatz 18-gun brig designed by Benj. Hutton, Jr., built at Philadelphia, by Nath. Hutton c.1803; for service in the So. Atlantic and Caribbean... 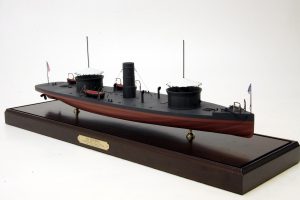 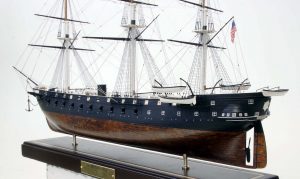 By: Bernd Braatz Bernd Braatz completed this model in 2014. This replica of the famous mid-19th century 264' steam frigate was commissioned by the Naval... 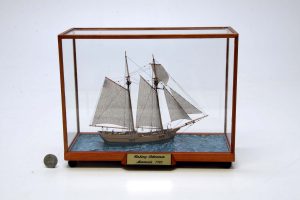 By: Bernd Braatz Waterline presentation shows this classic colonial fishing schooner or ‘heal tapper’ of the type built in Marblehead or Beverly, Massachusetts circa early... 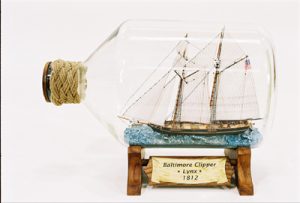 By: Bernd Braatz Ship in a Bottle presentation of the Baltimore Clipper of 1812. The deck is planked over with maplewood strips, Deck houses and...