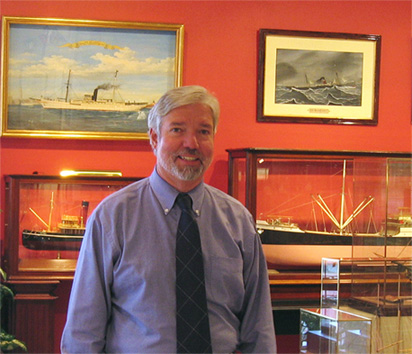 R. Michael Wall is considered internationally to be an expert on ship models. He has specialized in the procurement, sale and conservation of exceptional one-of-a-kind ship models since 1975. A graduate of Georgetown University’s School of Business he started his first company specializing in ship models in Tiburon, California. In 1979 he was asked to establish a comparable business for The Maritime Gallery at the Mystic Seaport. It was there that he prepared, in conjunction with the staffs of Mystic Seaport, the Smithsonian Institution, and The Mariners’ Museum, a definitive report on the standards implied by the phrase “Museum Quality Ship Model.” The resulting publication, Ship Model Classification Guidelines, ©1980, has provided both builders and collectors with a standard by which they can analyze and evaluate the efforts put forth on a given ship model.

In 2008, after 26 years in Salem, he moved the gallery to his hometown of Gloucester.

Over his long career he has advised and assisted in the formation of numerous private, corporate, and institutional collections at the highest levels, some of which have been recently featured in such publications as ‘Architectural Digest’ and the ‘Catalog of Antiques and Fine Art’. He enjoys an outstanding international reputation for his discerning taste, discreet client relations, and utmost integrity.

He is a member of the International Congress of Maritime Museums, International Society of Appraisers, the U.S. Nautical Research Guild and the American Institute for Conservation of Historic and Artistic Works (AIC).