Pat Cummings became interested in ship modeling in the early 1980s when she had Mr. Ernie Tarr, a custom boat-builder and modeler, do some repair work on her Annisquam Fish Boat, ‘CHINOOK’, which Mr. Tarr had built in 1967 while working at Gloucester’s Montgomery Boat Yard. She saw his models, and mentioned that she had always wanted to build a model of something - she had always been drawn to miniatures of boats, planes, trains, furniture, etc., - and Mr. Tarr suggested that they build a model of her ‘CHINOOK’ together. They did and after that, she was hooked. 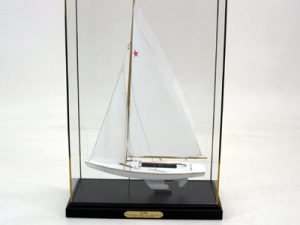