Mr. Britten has constructed models since he was a young child, his main interests even then being ships and aircraft. Trained as a professional cabinet maker, in 1963 he became a self-employed model maker. Much of his early work was in educational modeling, commissioned via Britain’s National library system, and included such items as windmills, bicycles, oil rigs and medieval buildings. His personal love, his ship models, can now be seen in the UK at the National Maritime Museum, National Museum of Wales, and the Science Museum, and in the United States at the Ships of the Sea Maritime Museum and The Mariners’ Museum. His work is also well represented in many corporate and private collections. 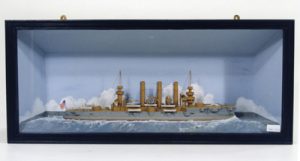