He entered his first ship model contest in 1967, winning first prize. He joined the Nautical Research Guild in 1967 and started writing shop notes in 1968 and then full-fledged articles of which dozens have been published. Pictures of his work have been on the covers of seven or eight publications. Starting in 1973, many of his articles were published in Model Shipwright. His first book, The Colonial Schooner, 1763-1775, has been very popular. His second book, Ships of the American Revolution and Their models, came out in 1988. Other authors have made use of pictures of his work in their books.

His colonial shipyard diorama is in the Mariner’s Museum and the model of HANNAH is on display in the Washington Navy Yard Museum.His first set of plans for a plank-on-frame model based on his special technique for SIR EDWARD HAWKE appeared in the Nautical Research Journal and then in the book, Ship Modeler’s Shop Notes. A set of plans for HALIFAX was published in Model Shipwright. Thirteen more plans have been produced for sale which have gone to twenty-five foreign countries; over 1000 sets of plans have been sold.He gave talks at Nautical Research Guild conventions in 1971, 1974, 1975, and 1983. His interest has been concentrated on late eighteenth century subjects. 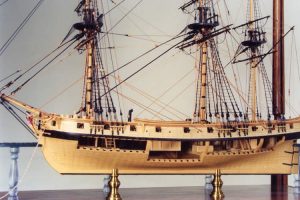