A professional modeler who specializes in Ships in Bottles, Alex Bellinger has been modeling for since he was very young, becoming serious during his college years at Boston University. After graduating and while doing volunteer work at the Peabody Museum he did some professional restoration work, which led to selling his own pieces in 1976.

Mr. Bellinger interest turned to Ships-in-Bottles. He became editor of Bottleshipwright from 1986-1989, in which he wrote various articles, and reviewed available kits. He has won several awards, organized the first American Ship-in-Bottle conference in 1987, lectures, teaches classes, and corresponds internationally on the subject. 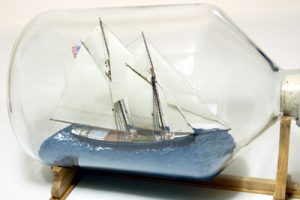